Tony Wilburn likes bluegrass music, U of Kentucky basketball, Diet Pepsi, giving other people sardines (which he hates), and reading the Handyman magazine cover to cover. He also likes Mustangs. "Woo-hoo!" he shouts when he spots one on the road.

The staff at D&S Community Services Center in Morehead, Kentucky assists Tony throughout his daily life. At 45 years old, his severe Type 2 diabetes requires constant monitoring. His hands often shake. He has some cognitive challenges and a speech impediment, making communication difficult with those unaccustomed. "Tony-speak" is what David Henderson, a direct support professional at D&S, calls it. "He often drops the first or last syllable, but if you understand the context, with time, you can understand him," David says.

He lives with a roommate and house managers on rotation from D&S. His only family is his brother, who sometimes visits. Tony has been at the center for four years. LeeAnn Creech, executive director of D&S, says the staff enjoys seeing Tony grow.

I got to meet Tony in 2017 during the Mountain Photojournalism Workshop in Morehead, Kentucky. 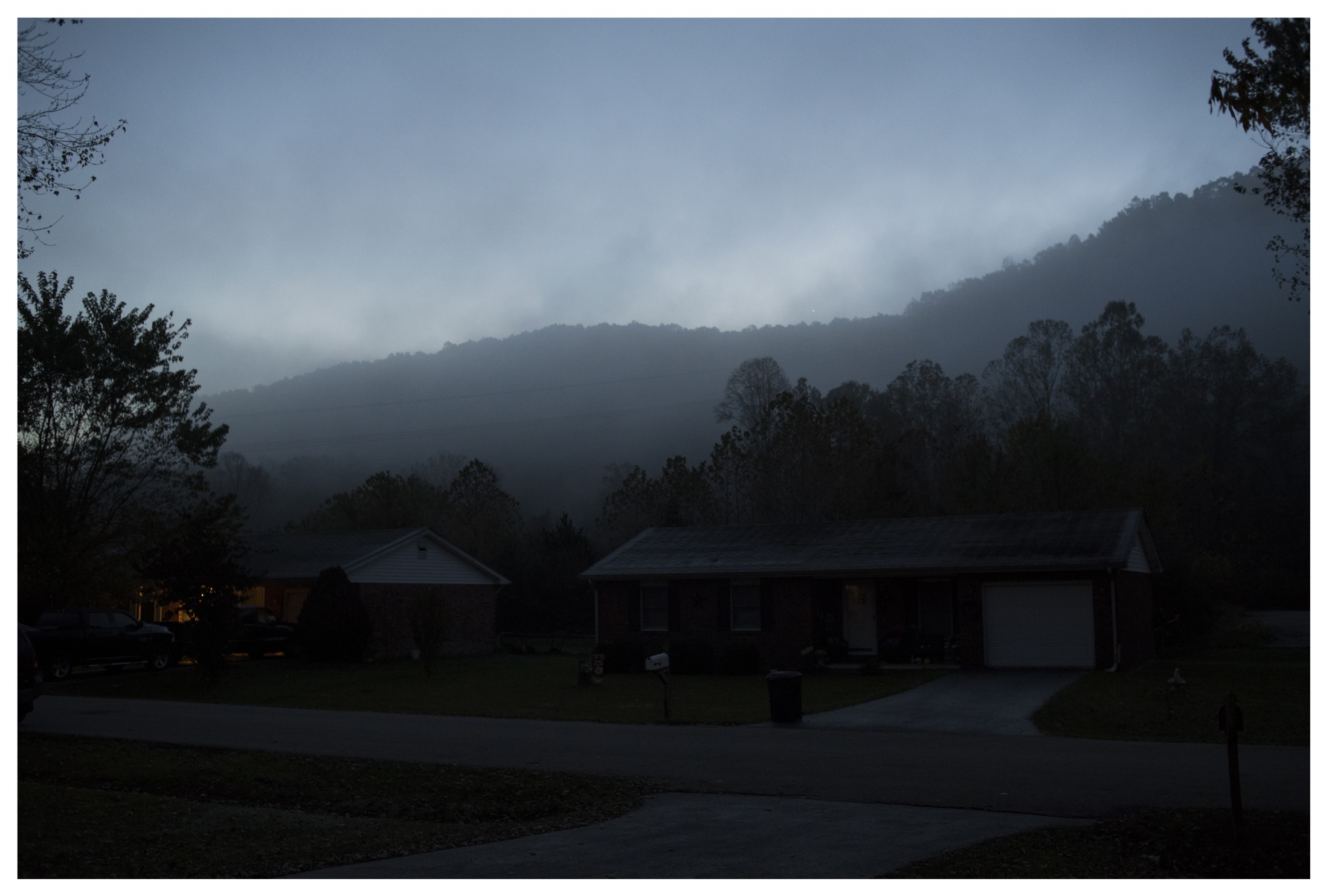 The view outside Tony Wilburn's house in Morehead, Kentucky, October 2017. 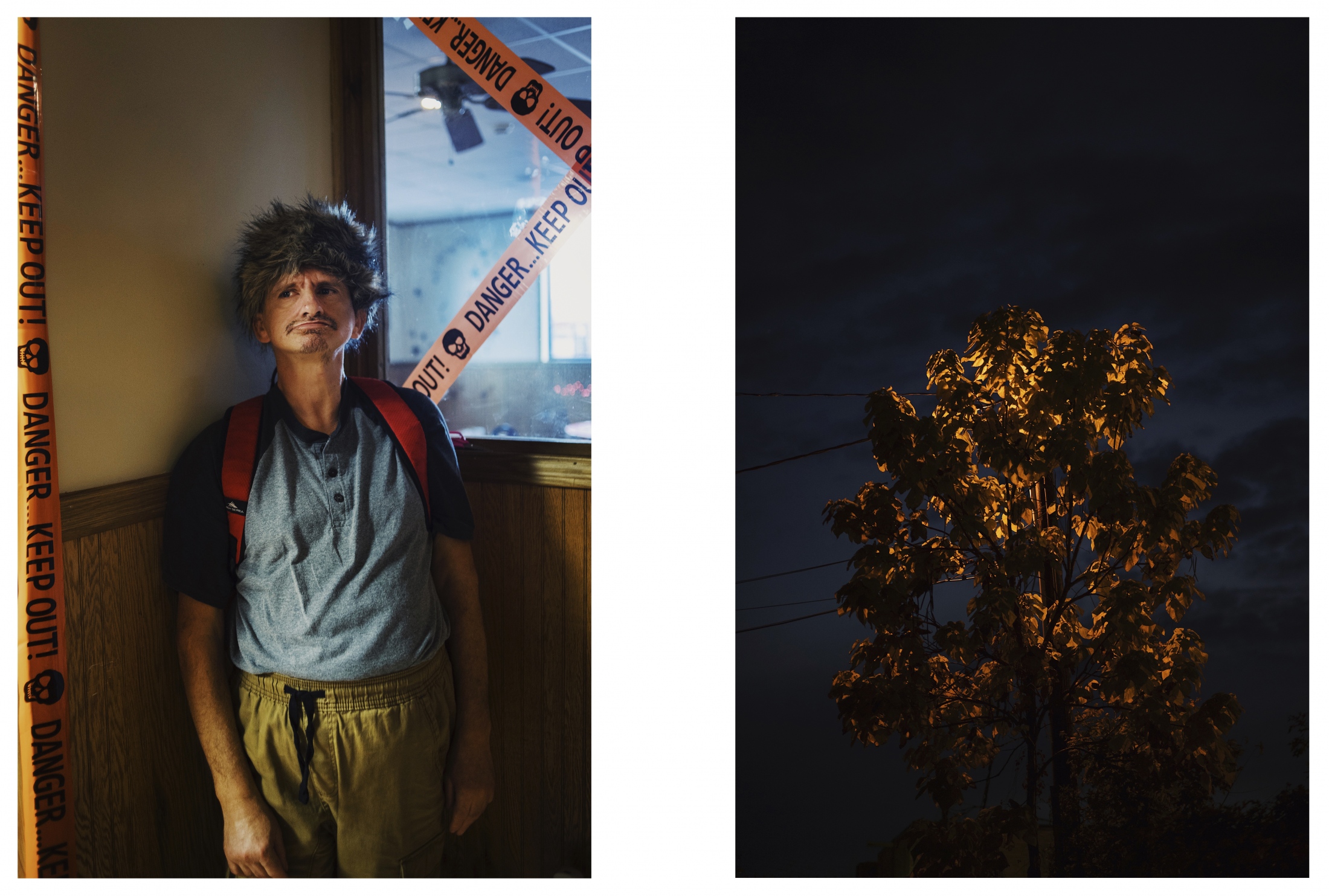 Tony is dressing as Daniel Boone for a Halloween party at D&S Community Services Center. He bought his hat at Fort Boonesborough Park. 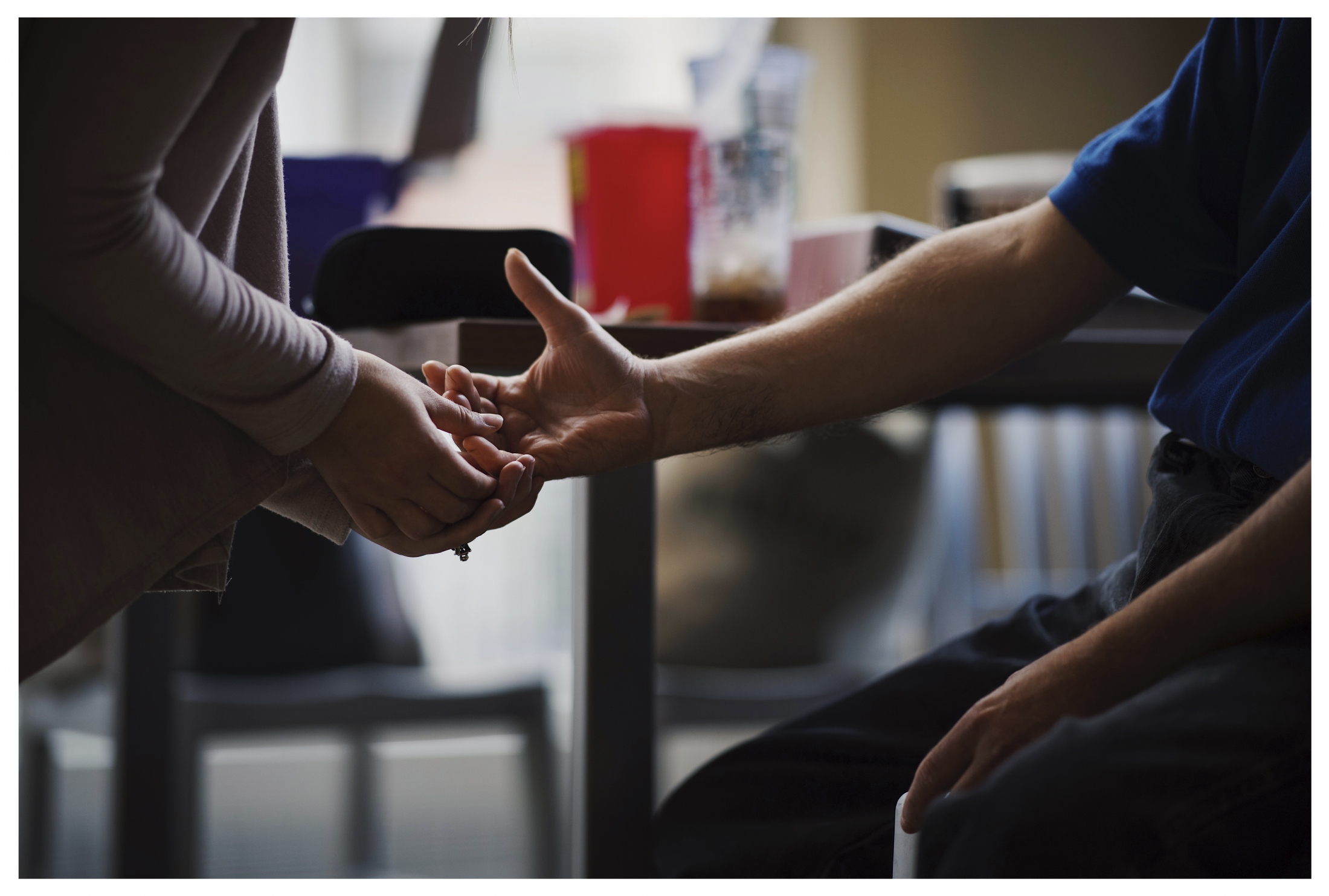 Employment specialists from D&S Community Services prepare to prick Tony's finger to check his sugar levels before his shift at "The Rock," the cafeteria where he works. Tony's sugar levels, diet and medicine intake require constant monitoring. 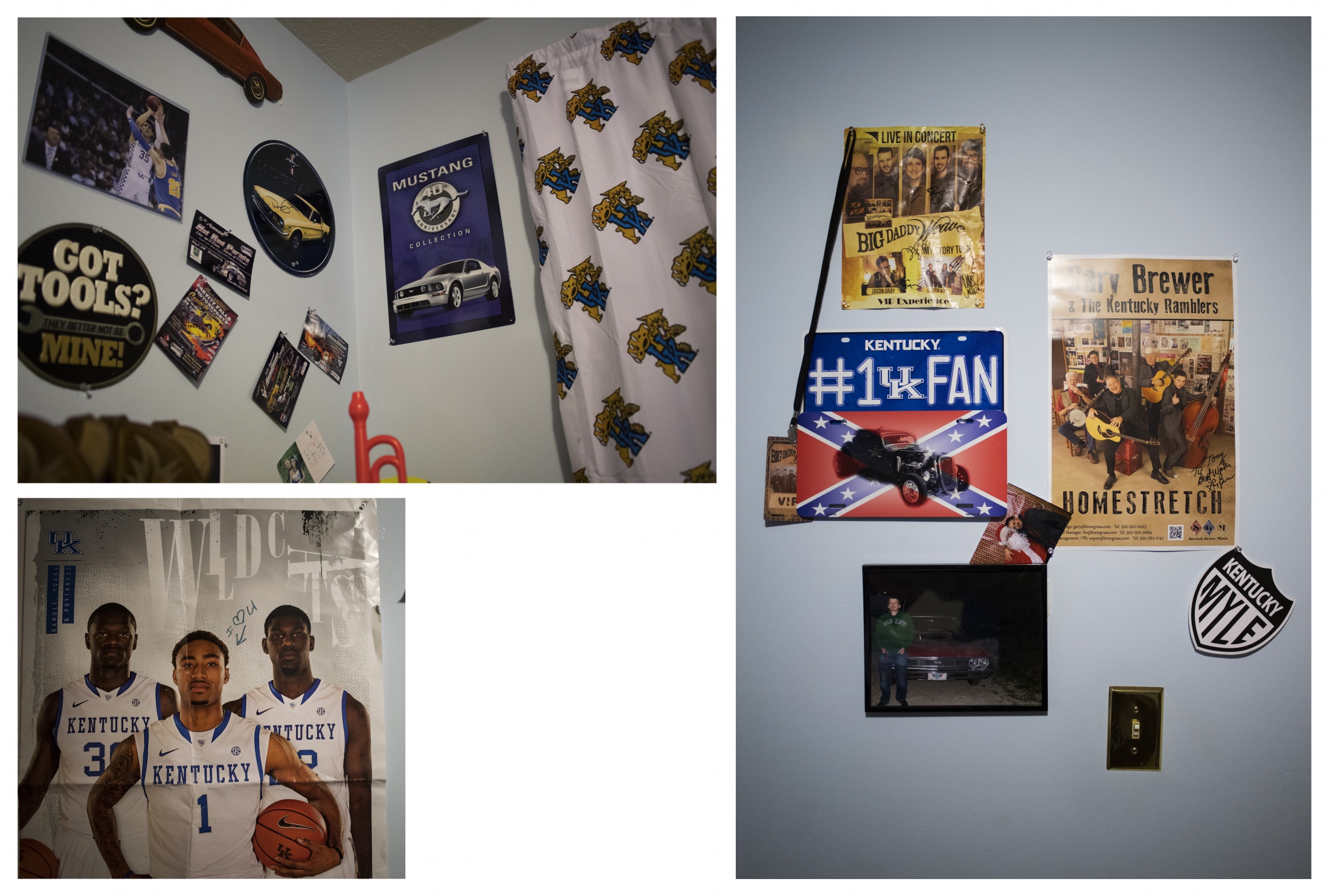 Some of Tony's favorite things, hanging in his room. 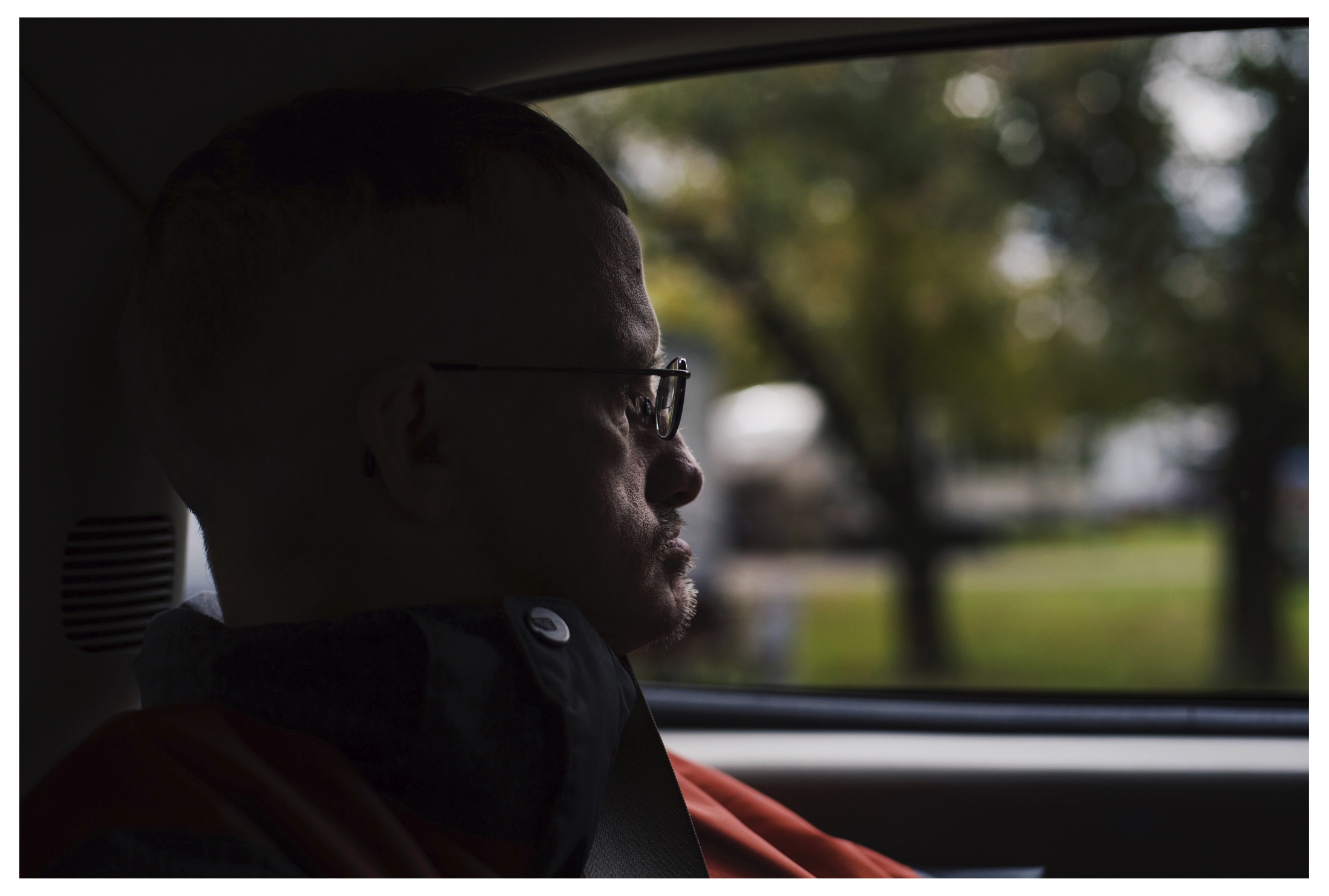 Tony looking out the window on the way home from Fort Boonesborough Park. 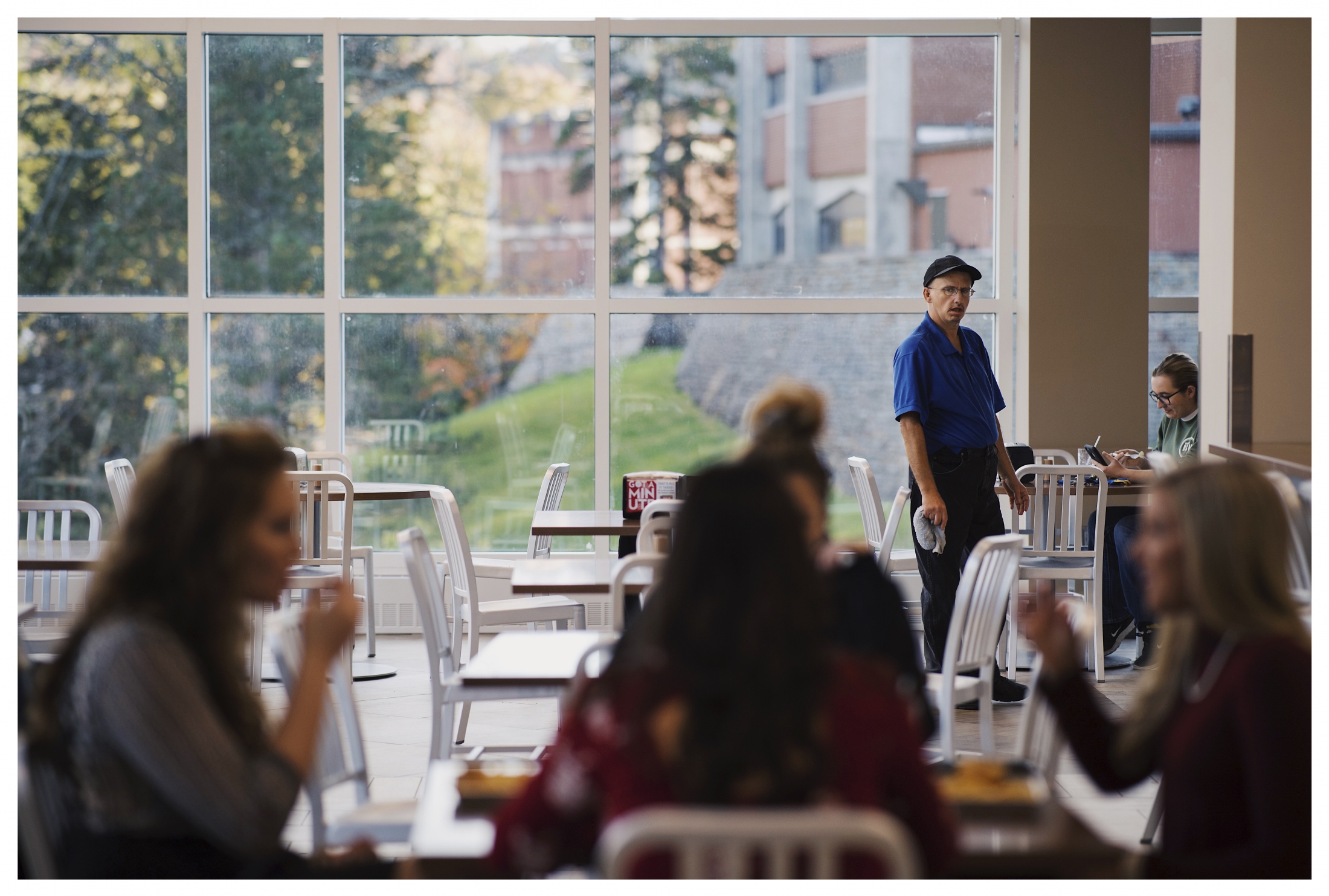 Despite a medical condition that may prevent others from seeking work, Tony works part-time, cleaning tables and drink stations at Morehead State University's Rocky Adkins cafeteria. Tony takes pride in his job and seldom misses his 3 to 9 p.m. shift, four days a week. "I can't wait until Monday," he says on Fridays. 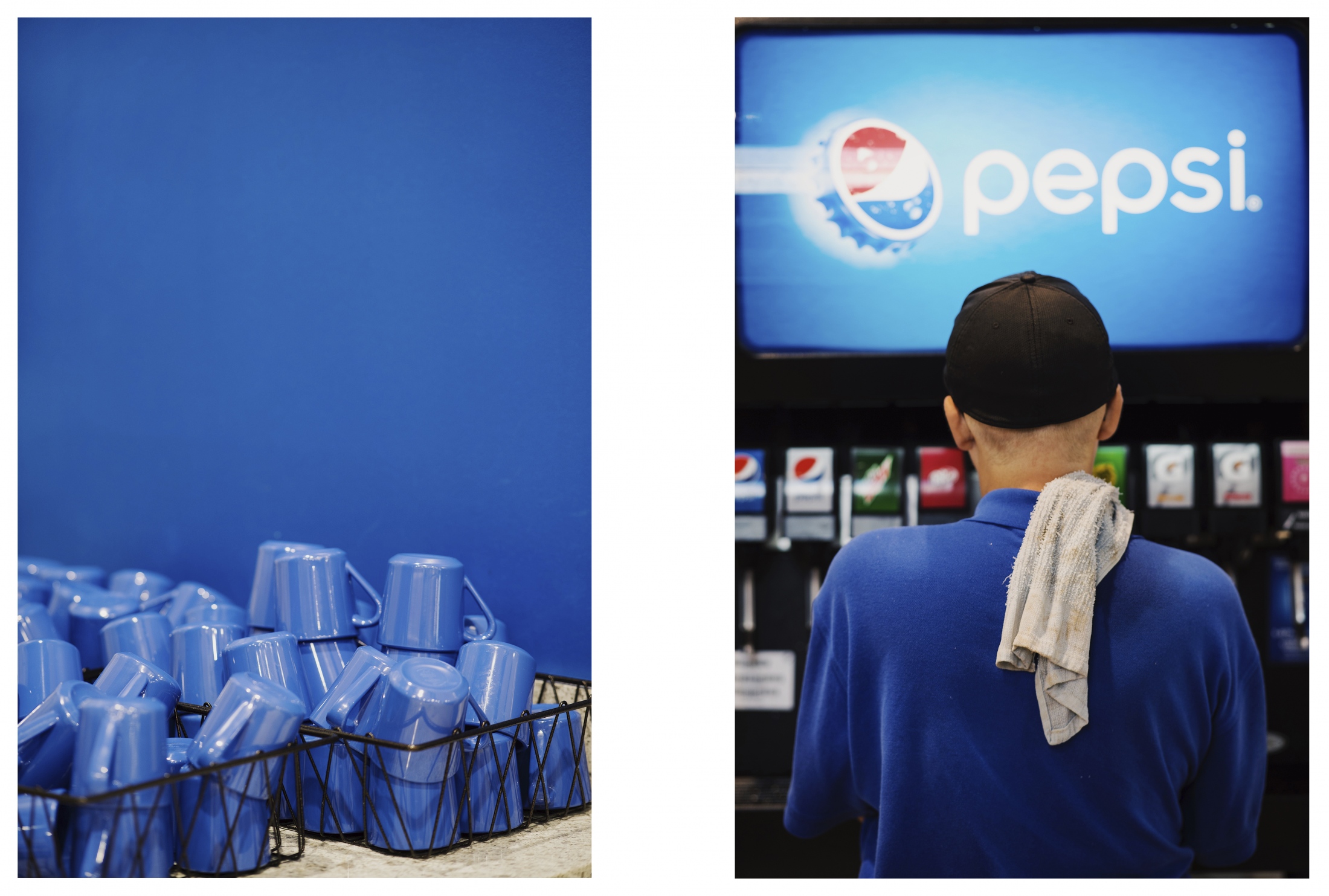 Tony is responsible for keeping the cafeteria's soft drink stations clean. His severe diabetes means his sugar levels need constant monitoring. Out of all the soft drinks offered in the machine, he can have only Diet Pepsi. 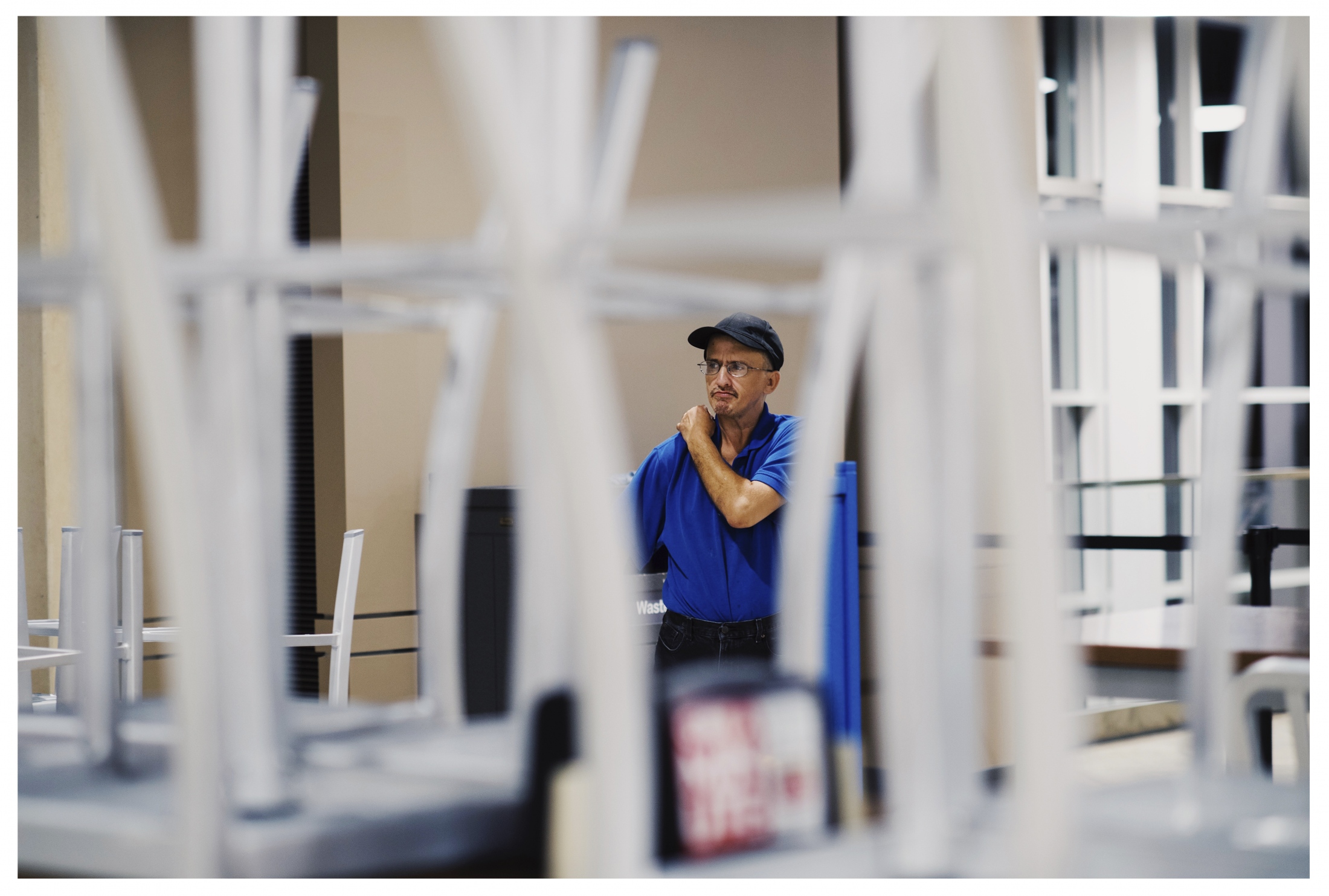 Tony walks behind chairs propped upside down in preparation to close out "The Rock" cafeteria at Morehead State University. He cleans tables and work stations throughout the cafeteria. 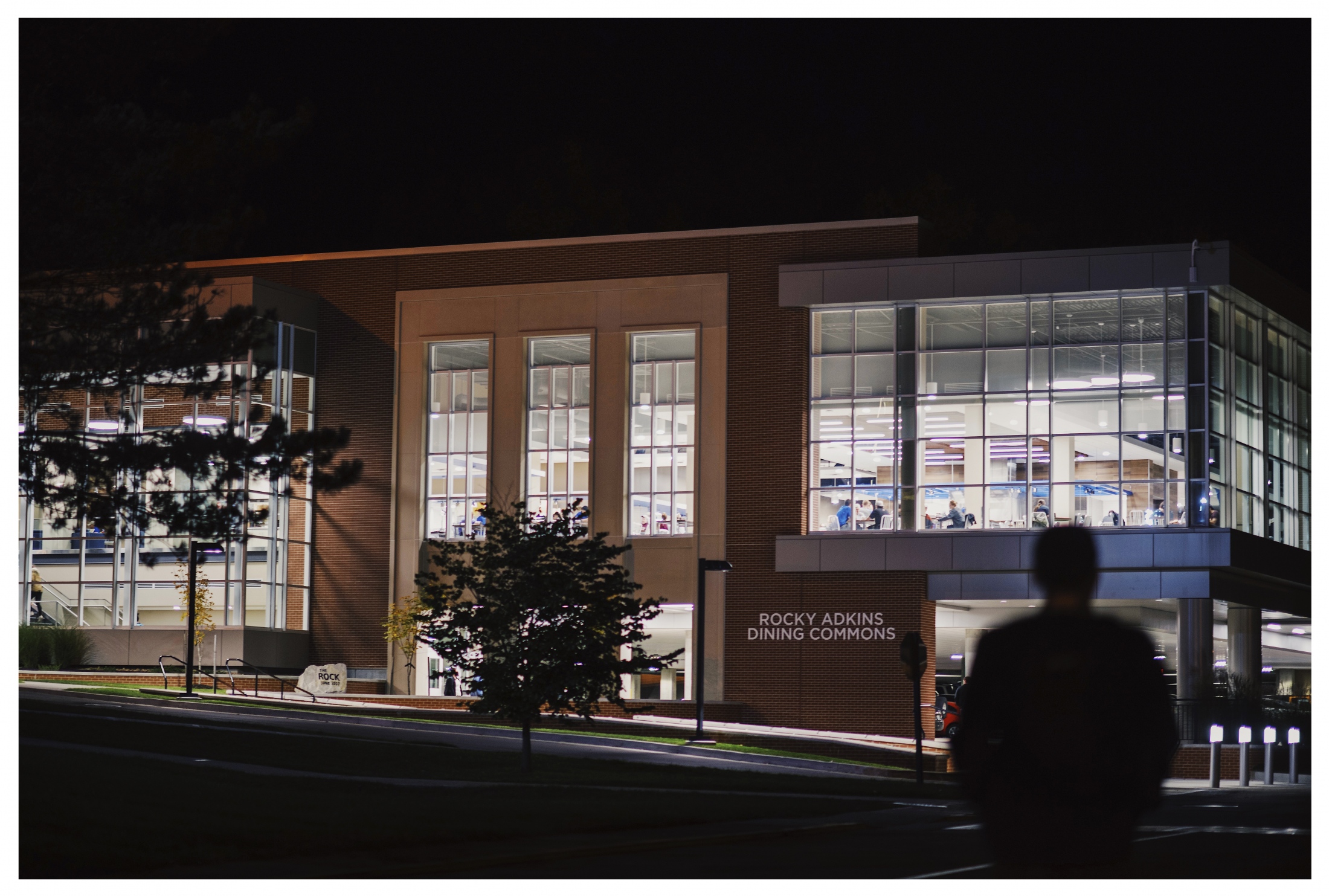 Rocky Adkins Dining Commons, also known as "The Rock," from outside. 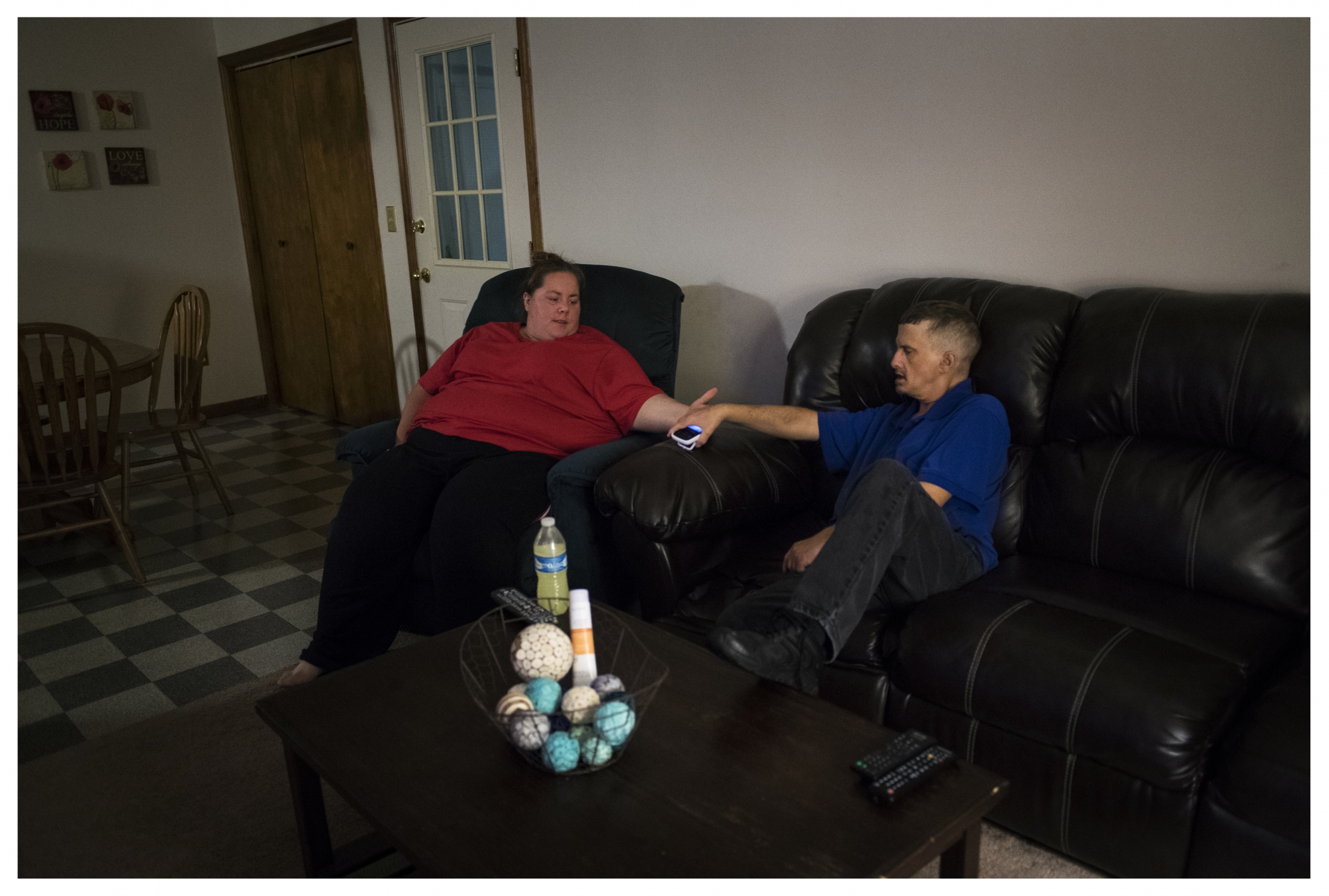 Natalie Weaver, a House Manager from D&S Community Services, holds Tony's hand after his work shift. Natalie is one of three managers who rotate residence in the home to support Tony and his roommate. 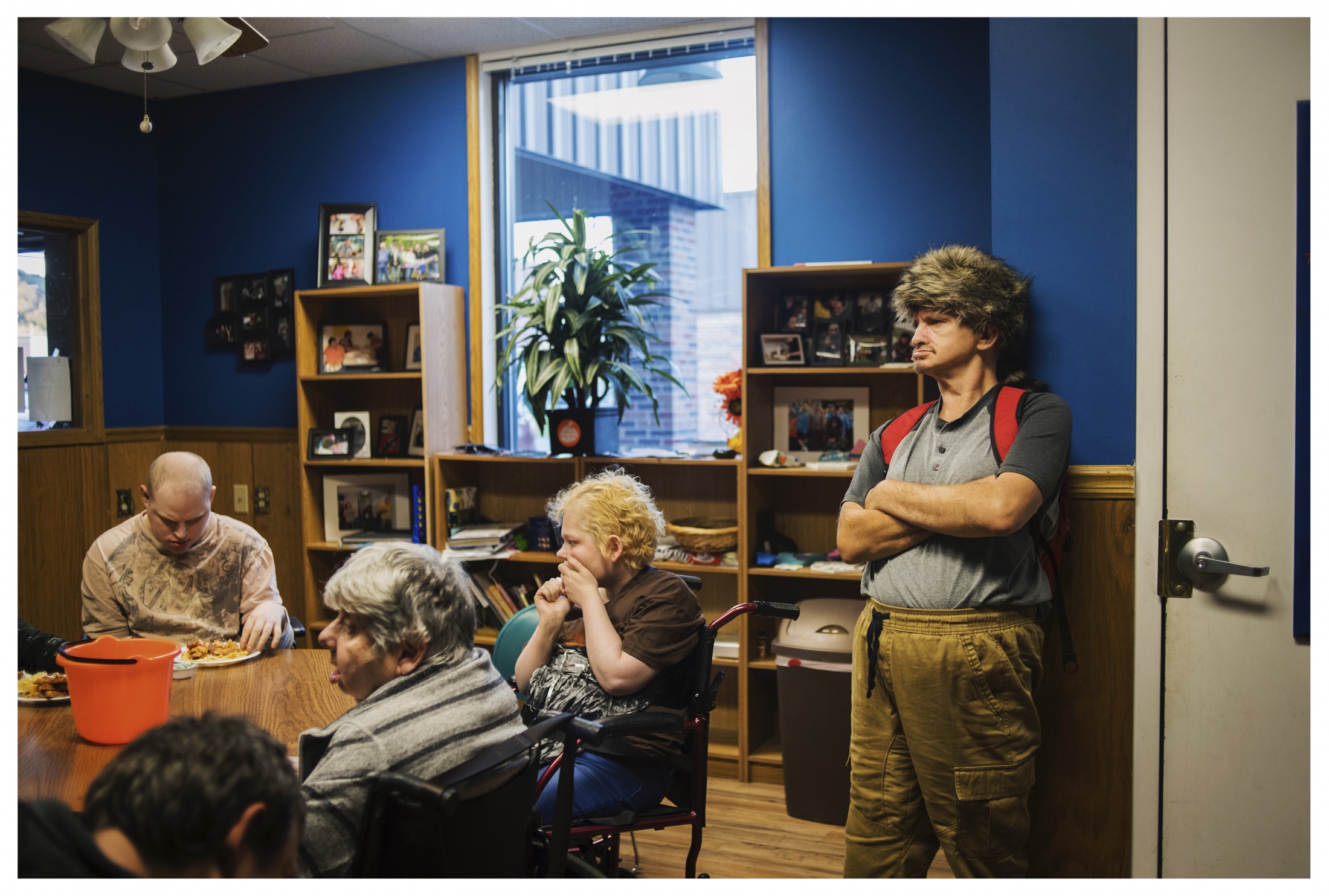 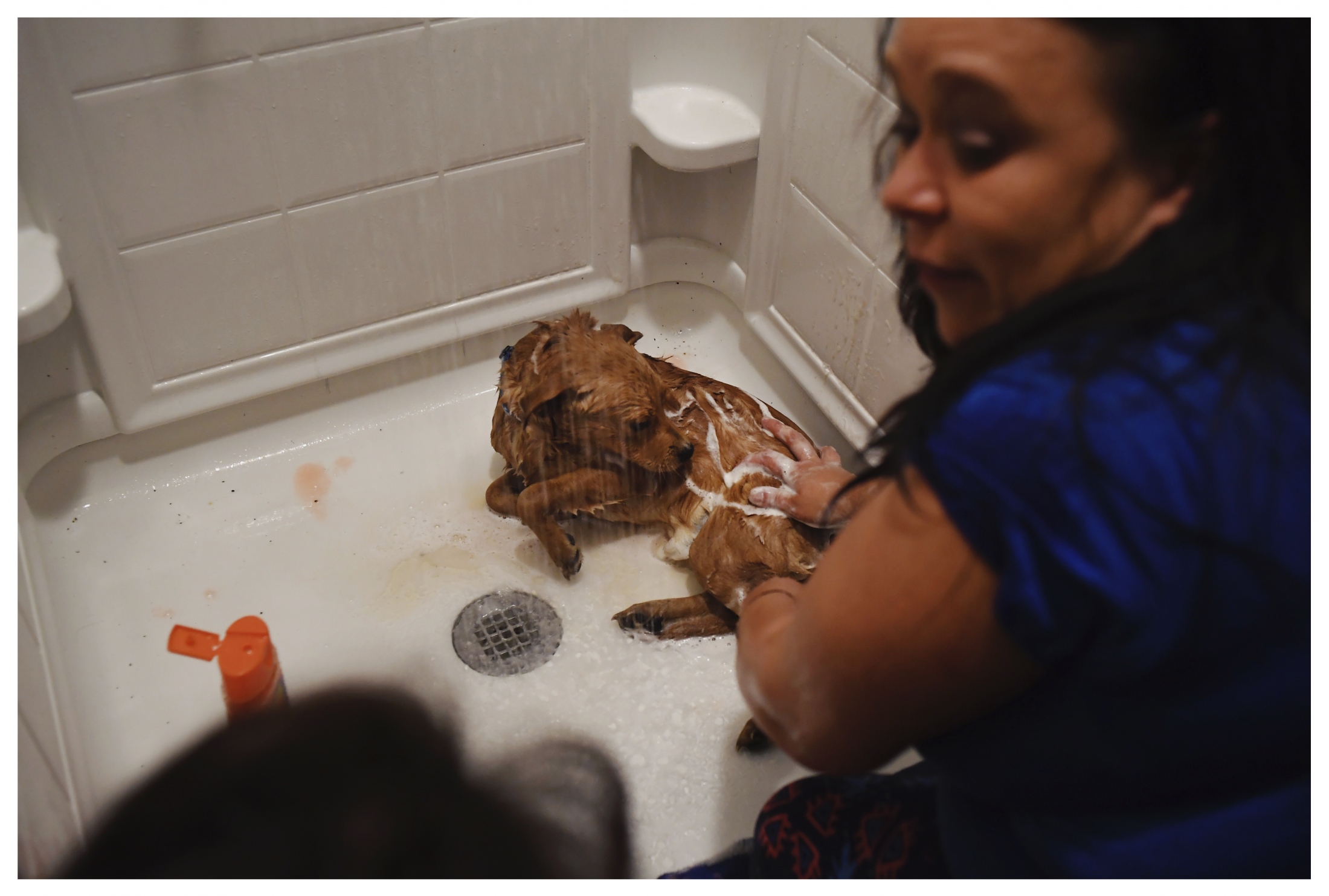 When Bertram, a service dog, made an unannounced appearance in Morehead before going to New York for training, Tony was in for a surprise. Crystal Skeens, right, applied for a grant to give the dog to Tony, and is pictured washing him before the meeting. "This is why we do this," David Henderson says. "Moments like this makes it worth all that we go through in our jobs." 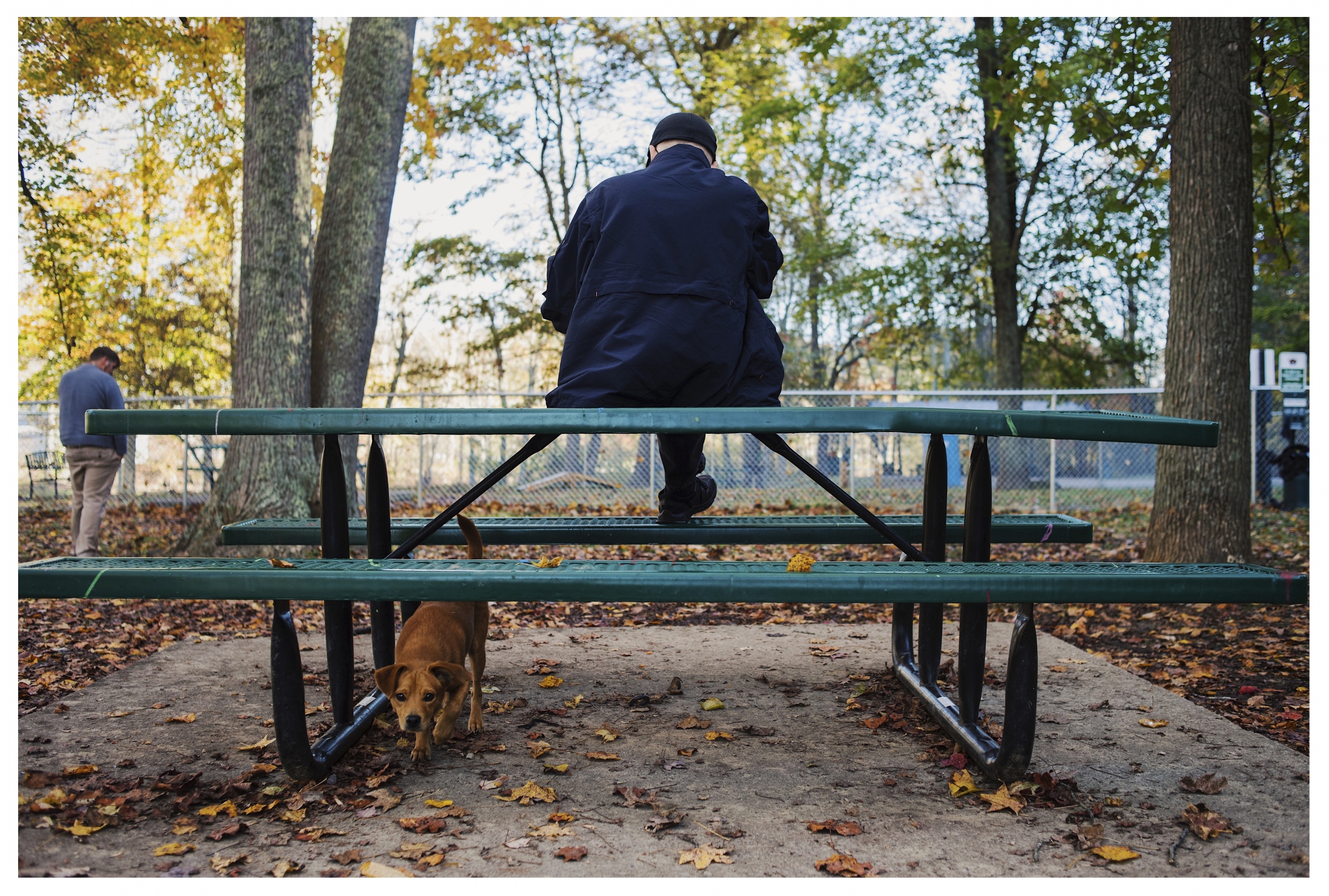 On their one afternoon together, Tony and Bertram visit Morehead Bark Park. Bertram, a Mountain Cur and Pitbull mix, will be trained to assist Tony in watching his sugar levels. When Bertram barks toward the right side of Tony's body, that will mean Wilburn's sugar levels are low, while a bark toward the left will indicate a high sugar level. 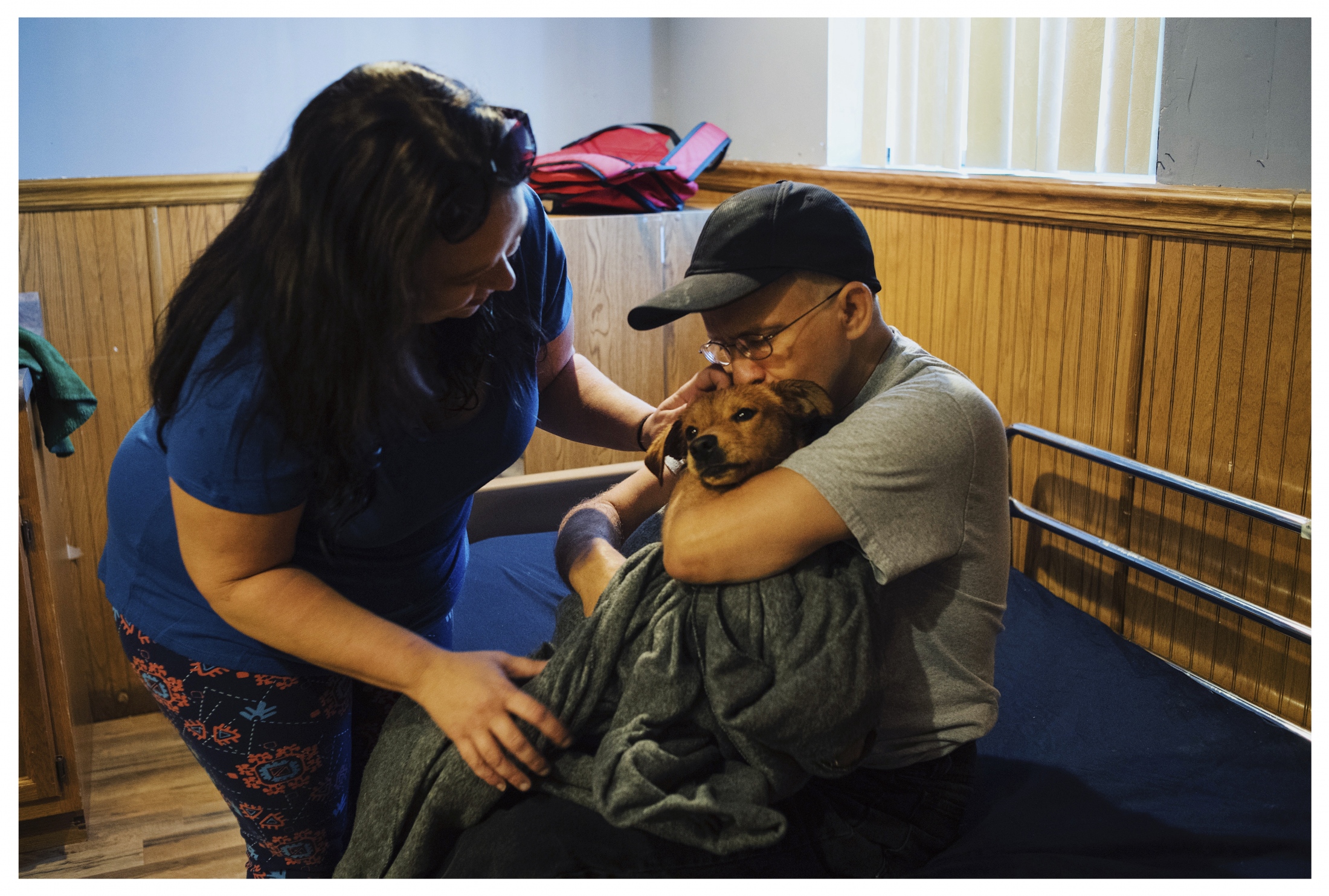 Tony embraces his service dog Bertram before he is sent off to Buffalo, New York for training. The two won't see each other again until Christmas. Service animals such as Bertram help individuals with disability gain independence. 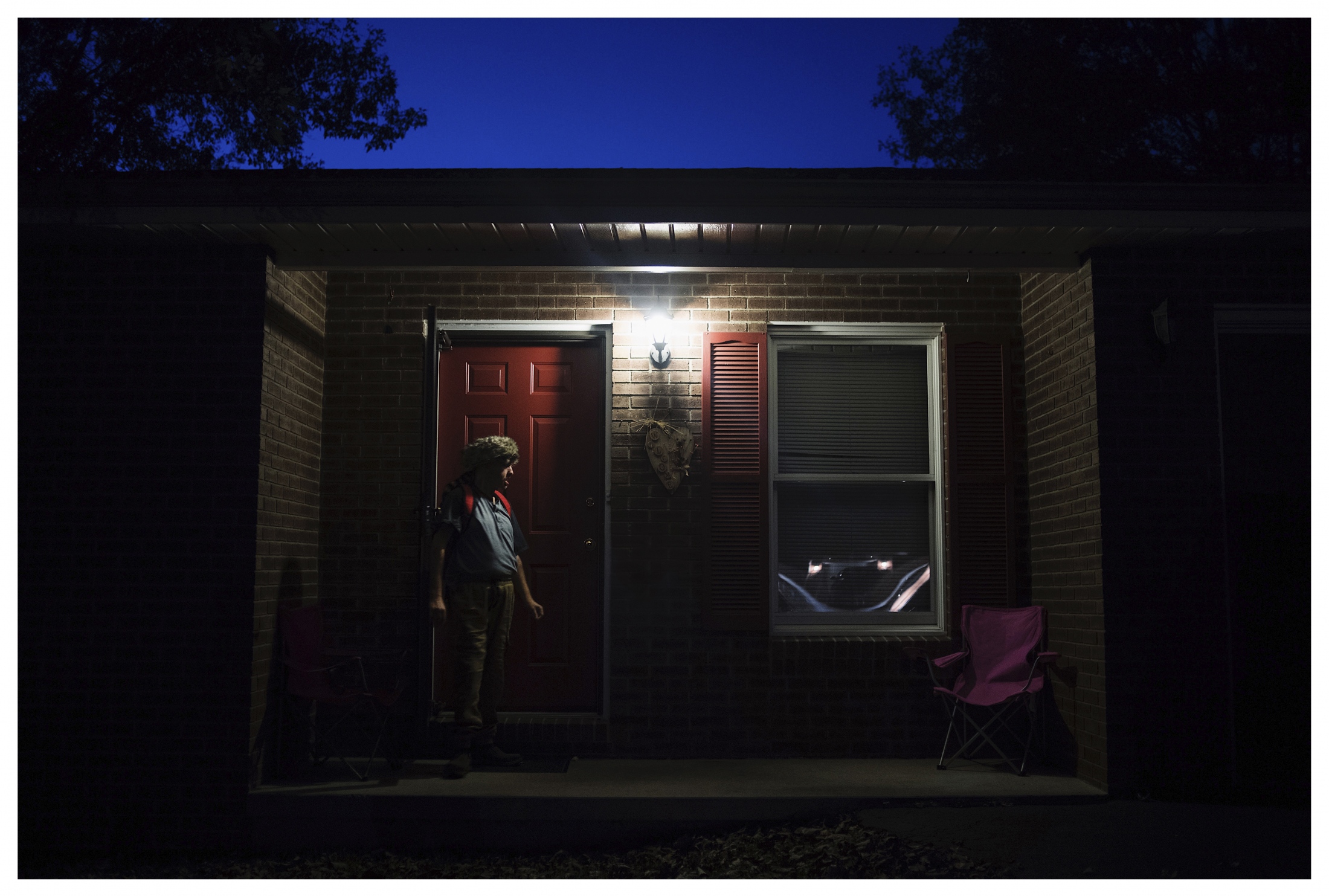 Tony outside his home after returning from a Halloween party.